Christmas dinners do NOT need to be complicated. Here's what we had:

Sounds like a mouthful, but it should take you no more than ONE HOUR.

Skin the giant leg of ham. Run knife in a criss-cross fashion on the surface and stick cloves in the Xs. Make a glaze of honey, barbeque sauce, mustard and a little olive oil. Baste half of the glaze on the ham and stick in the oven for 20 min. Baste again with the rest of the glaze and return to the oven for another 20 min.

Boil, peel and mash potatoes. Mix with butter and make it smooth. Season with salt and pepper and serve with gravy of your choice.

Mix a cup of softened cream cheese with 4 spoons of sugar and some cinnamon. Stuff into tart shells (got mine from store) and stick a half-strawberry on top. Refrigerate.

Serve with salad and wine and listen to Carol of the Bells! 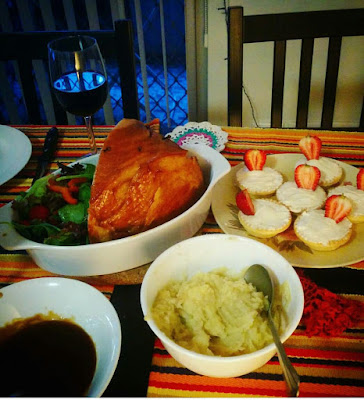 Posted by Shreyasi at 9:16 PM No comments: