The more I've delayed attempting paella in my kitchen, the more the idea has increasingly intimidated me. Paella enthusiasts are very particular about doing it right. Some say garlic and chorizo do not belong in an authentic paella, and mixing seafood and chicken is nothing short of sacrilege. The fact that I used a nonstick frying pan instead of a paellera pretty much begs for scorn. Nevertheless, I love paella too much to never try. And try I did. And somehow managed to burn the bottom just a little, just the way it's supposed to be! So here is my easy, blasphemous recipe.

Heat a little olive oil and add a fat spoon of chopped garlic and some sliced chorizo. Also add two bone-in thigh and two leg pieces and let fry on both sides for 15 minutes. Then add two diced tomatoes and some green beans and cook for a while more. Finally add two and a half cups of medium-grain Spanish rice or Arborio (risotto rice), a dash or three of smoked paprika, two branches of fresh rosemary and a few strands of saffron, with three cups of water and salt to taste. Simmer till the rice is cooked; try not to stir the rice too much. Dry it up and serve!

PS: some recipes will ask you to add stock. All I'm saying is, if it's a one-pot recipe involving cooking chicken with the rice and then simmering, the water becomes broth anyway. You don't need stock. 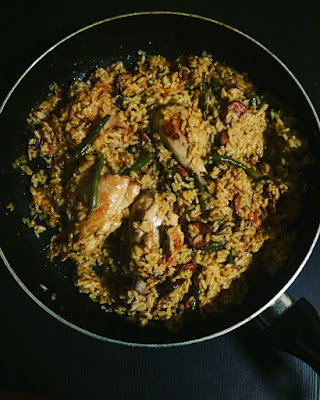 Posted by Shreyasi at 7:53 AM No comments: