This super creative name for this dish came to me in a dream last night.

There are two kinds of fried fish in Bengali cuisine. There's the pan-fried fish steaks made at home, called "maach bhaja", which literally means fried fish, and then there's "fish fry", which is a battered fillet deep-fried and served as a snack, and is basically street food. I just dropped some mad culture on you.

Get your favorite white fish fillets. Bengalis use barramundi (also called "bhetki"); good substitutes would be grouper/hamour, tilapia, or basa, which is what I used. Cut each fillet into two or three pieces. In a big bowl, put in an egg, some salt and pepper, chopped or ground green chilies, and ginger-garlic paste, and mix. Add enough water to have the mix cover the fish completely, and add half a cup of cornflour. Then add the fish and let the bowl sit for a little bit. Meanwhile heat some oil for deep-frying and spread breadcrumbs on a plate for coating. Take each piece of fish out from the bowl onto the plate and cover well with breadcrumbs. At this point I poked a few holes in the fillet with a fork to make sure that the inside cooks evenly. Then deep-fry till browned.

Serve with traditional kasundi or Dijon mustard, and some sliced onions and cucumbers, and you're golden. Ignore my plate; I'm boring and I eat salad. 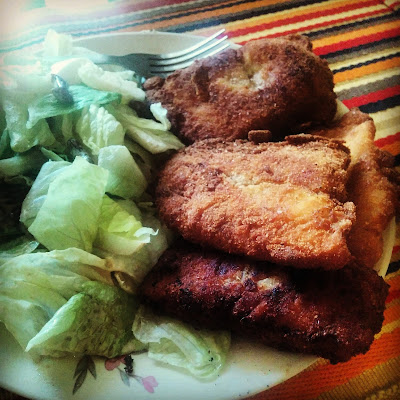