Inspired by the famous laal maas recipe of Rajasthan, here's my own take on what royal/Rajputana means!

In a pressure cooker, add liberal amounts of ghee (a little less than a cup) and put maybe one and a half large onions (3 if small), thinly sliced, and fry until just starting to brown. Then add a stick of cinnamon, 4 cardamoms, 2 star anise, 2 bay leaves, a spoon of chopped garlic and as many dried red chillies as you can handle (if in India, 5 ish, more if you're abroad because the chillies aren't as potent) plus a small spoon of Kashmiri red chilli powder. Add a spoon of coriander powder and a little turmeric. Stir well and add the mutton. Salt as needed.

Without adding water, close the pressure cooker and give it 2-3 whistles, just enough to barely cook the mutton. Open and stir until cooked; check for salt and spice and add milk and lime if too spicy. Towards the end sprinkle a little more fresh garlic. Turn off the gas and serve hot with fresh chapatis or methi parathas! 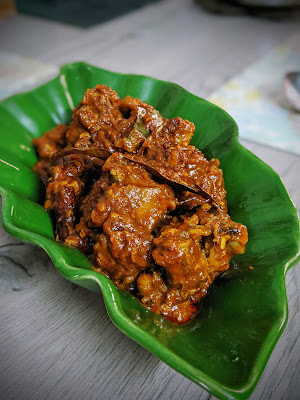 Posted by Shreyasi at 8:12 PM No comments:

Every Hyderabadi curry recipe I look up is different than the previous one. The recipe I enjoy the most is a sesame-peanut based curry rather than one with cashewnuts. Here is my 30-minute recipe (serves 3-4).

While the chicken marinates for a few minutes, heat a little vegetable oil in a pan or wok and caramelize one sliced onion and 4 chopped green chillies. Once caramelized, add the chicken and all the marinade. Cook on low with the lid closed - adjust the salt as necessary, and maybe a little water to keep the gravy plentiful. Reduce the curry to your preferred amount and add a light dash of lime. Serve hot with parathas! 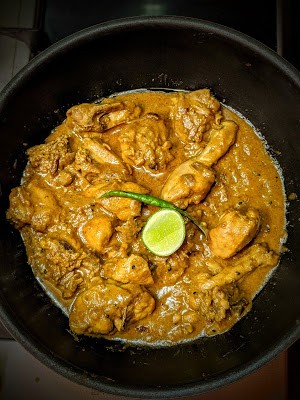 Posted by Shreyasi at 2:29 AM No comments:

It's baking season! Banana bread combines two things I love the most - using up food that needs to be eaten, and the smell of something freshly baked. If you've got a few bananas that are overly ripe, use this easy recipe.

Preheat oven to 170C. Mash three overly ripe bananas until smooth. Then add a cup of sugar, a fourth of a cup of melted butter, a dash of vanilla essence, a sprinkle of cinnamon powder and an egg. Combine, and then add 1.5 cup self rising flour. If nut allergies aren't an issue add a cup of broken walnuts. Combine till just mixed. Grease a small loaf pan (or a big loaf pan if you want cake-ish slices like I got) and pour the batter in and bake for an hour or until a toothpick comes out clean or with a few crumbs. I like mine the tiniest bit undercooked :)

Cut slices and serve warm with a dab of butter. 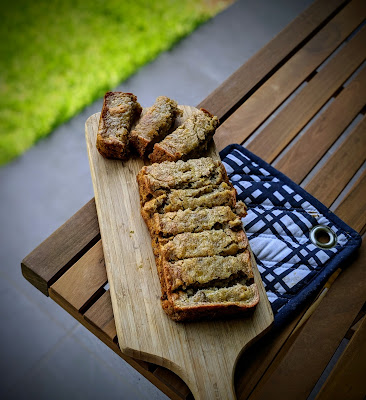 Sooji (semolina) halwa is possibly the most common recipe to be used as prasad (holy offering) in a puja (Hindu religious ceremony). However, you don't need religion or an excuse to enjoy one of the simplest and mildest desserts of all time! This recipe takes maybe 15 minutes to make and will serve 15 to 20 people (depending on serving size).

In a pan, heat a cup and a half of ghee on low. At the same time, in another pan, heat a little more than 6 cups of water and a cup and a half of sugar on medium heat. When the liquid starts to boil, lower to a simmer. Once your ghee is hot, add a little more than 2 cups of fine sooji/rava (semolina) along with a cup of cashews. Keep stirring vigorously to mix well for about say 8 minutes or until you start to see a nice golden color in the sooji. Add two teaspoons of green cardamom powder and optionally a cup of raisins. Mix well.

Now add the sugary water very slowly to the pan with the sooji and keep mixing. The semolina will soak up all of the liquid. Once you've added all the liquid, you've got yourself a nice, soft halwa that's ready to be served hot! 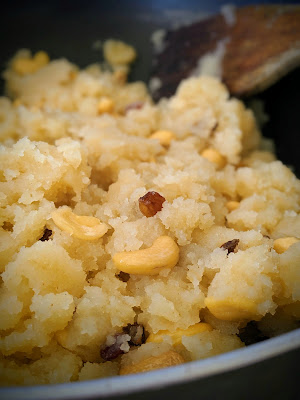 Posted by Shreyasi at 9:31 PM No comments:

My trip to Japan last year turned my love for Japanese food into an absolute obsession. Being an Indian, the taste of Japanese curry is so different to my palate, and I find myself ordering a side of curry to literally anything I order in a Japanese restaurant. This is my take on Japanese chicken curry, traditionally made with beef. Also, this recipe does not use boxed Vermont curry cubes.

Fry 2 chopped onions, 3 slit red Birdseye chillies, 4 chopped garlic pods and a spoon of ginger paste in 2 tablespoons of vegetable oil. Add to it 800g chopped chicken thighs - or small cubes of fatty beef if you like - and fry until no longer pink. At this point add a diced potato and a diced carrot (both of which I didn't have) Add salt, a pinch of turmeric, a spoon of red chilli powder, two spoons of garam masala, a spoon of curry powder, a tablespoon of honey and two tablespoons of butter. Mix everything together and add 4 cups of water. Grate a small sweet skinless apple into the water. Bring to a boil and remove the scum from the top.

In a bowl, add a little water to 4 tablespoons of flour and mix well until you have a well-mixed slurry. Add this into the pot, mix and reduce until your texture seems right. A dash of ketchup and soy sauce might add a little complexity to the curry, or skip it if it tastes right. 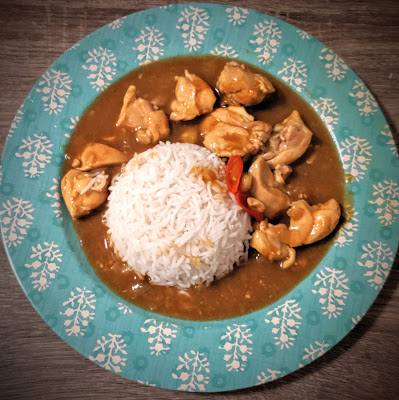 Khichdi, khichuri, khichra... A universally loved yet vastly versatile dish that is made so differently by each culture in India. This recipe is significantly more "North Indian" than the bhog-er khichuri recipe I've shared earlier.

To serve two, pressure cook half a cup of molng dal with half a cup of rice, salt, half a spoon of turmeric and some asafoetida (Hing), and 4 cups of water, for about 6 whistles or until everything is mushy. M

in a small sauce pan or tadka kadhai, heat a generous spoon of ghee, to which add some cumin seeds, mustard seeds, fennel seeds, ajwain and kalonji. Then add two broken green chillies, a little ginger, a half spoon of red chilli powder, half a cup of peas and less than half of a tomato (chopped).

Once the mush is ready pour the tadka over the Khichdi and garnish with coriander leaves or a little dried pudina (mint). Serve piping hot! 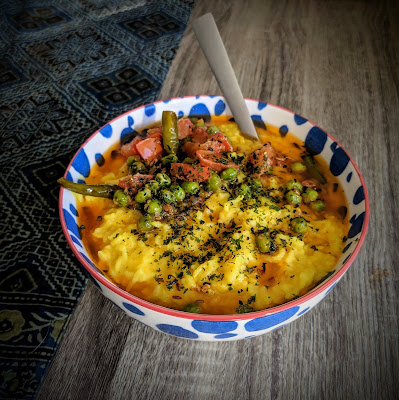 Posted by Shreyasi at 2:44 PM No comments:

Host a brunch for your buddies and serve up a café-style eggs benedict for extra points! This recipe serves 3.

The star of this dish is hollandaise sauce, which is best made fresh and ready to serve. Simmer some water in a pan; place a metal colander as a lid on top and place a heatproof bowl in the colander (so it's not touching the water). Whisk 3 egg yolks continuously in this bowl while it is being heated by the water, and slowly add 6 tablespoons of softened butter spoon-by-spoon while whisking. Once the mix thickens, add the tiniest splash of lemon, and a little salt and pepper. Set aside.

Poach 6 eggs for 3-4 minutes for a perfect runny center and prepare either bacon or ham strips enough for three plates, while you lightly toast three slices of sourdough. Place the bacon or ham on the sourdough slice and top it off with two poached eggs per place. Drizzle the hollandaise sauce over the top and garnish with parsley. Serve with mimosas! 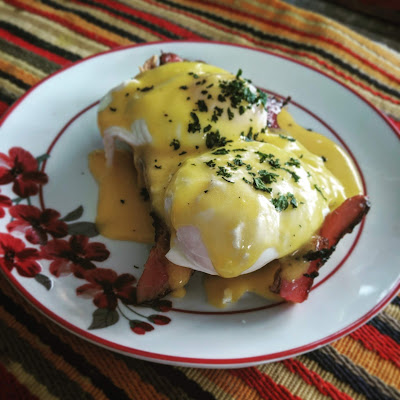 Since I'm on a soupy spree, here's a last quick mutton stew if you just don't feel like a salad. This recipe serves 4.

Marinate 1kg goat (bone-in) in salt and a spoon of turmeric. Meanwhile chop an onion, four large cloves of garlic, a cm of ginger and 2 green chillies. Heat a spoon and a half of mustard oil in an open pressure cooker and add a bay leaf, a cinnamon stick, two cloves and a green cardamom. Add the chillies, ginger, onion and garlic to the oil and cook. Once cooked, add the mutton to the cooker and stir. Add a half spoon of cumin, a half spoon of curry powder, a pinch of sugar and salt to taste and mix. Then add 4 cups of water and one potato cut into 4 pieces, and close the cooker. Cook the stew for 6-7 whistles and turn off the heat. Once the pressure cooker loses all steam, open to check if the meat is cooked and if the salt is right. Serve by itself with a dash of lime and a sprinkle of dried mint! 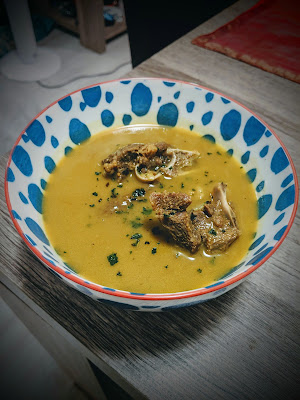 Posted by Shreyasi at 9:43 PM No comments: