Fettuccine alfredo has been on my to-do list for as long as I first went to Olive Garden as a kid. There aren't that many pasta-loving noobs who'd say no to a creamy alfredo sauce. As I started experimenting with cooking, I held off on the alfredo sauce largely because the first time I actually made gulab jamun with my own hands and found out just how much sugar went into the dish, I almost stopped eating it completely. Thankfully I had a bite of my first fettuccine alfredo yesterday, which by the way is literally a 15 minute recipe, and I instantly knew that I'll never stop eating this scrumptious load of fat. For reference, I made the sauce by throwing in things until it tasted right, so take all my mentioned quantities with a grain of salt.

For about three fat serves, boil 250g fettuccine until cooked al dente, and drain. While the pasta boils, heat about three tablespoons of butter in a saucepan and add a small spoon of minced garlic to it. Then add about a cup of cream, half a cup of cream cheese, half a cup of grated Parmesan, and salt and white pepper to taste. Simmer and thicken until happy with the sauce. (For a little more flavor, what I did was fry small pieces of chicken thighs in butter and garlic first, remove the chicken and then make the sauce in the same pan.) Throw in the fettuccine (and chicken), and we're good!
(Just, like, go for a run the next day or something.) 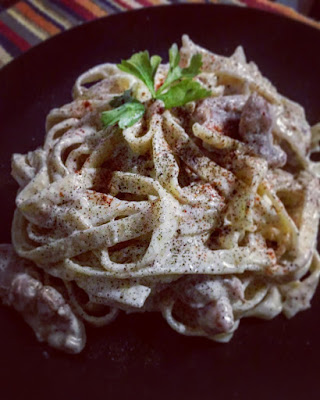 Posted by Shreyasi at 8:59 AM No comments: